By Kamala Thiagarajan28th September 2021 by BBC.com

In a small room, painted a light shade of pastel pink, nearly a dozen men and women are hard at work, hunched over desks that line the walls, their fingers flying at a frenzied pace over clattering keys. The soothing rhythm of typing punctuates the incessant drone of traffic.

For the last six years, in the heart of one of the busiest streets in the Southern Indian town of Madurai, Dhanalakshmi Bhaskaran has been teaching typing skills in shifts to hundreds of students every day, running an institute powered entirely by 20 manual typewriters.

The Umapathi Typewriting Institute, named after her son, can teach you typing in three languages – English, Hindi and the local language of Tamil. The typewriter they use, a model called Facit, is more or less unchanged since it was launched in the late 1950s. Bhaskaran’s students come from all walks of life, she says. Some are still in high school, intent on learning typing to give themselves an edge in a competitive job market. Others are professionals vying to secure jobs in government-run offices. There are a few young mothers too, drawn to her classes with the hope of re-starting their careers after having children.

The institute is one of many government-approved centres for typing – at the end of the course, students are enrolled in exams conducted every six months. If they pass, the certificates that are issued are helpful for jobseekers.

But in a world where mechanical technologies have long been superseded by digital ones, and where laptops, computers and even tablets are now more affordable than ever, why would anyone invest in their typewriting skills?

For job seekers who don’t have access to laptops or personal computers at home, learning typing on a manual typewriter can be a lifeline, says Bhaskaran. «Once you’ve trained on this machine, you can really improve your typing speed and avoid mistakes. And it’s easy to transfer those skills to the computer,» she says. A typewriter’s portability is practical and prized, too. After lockdown restrictions eased, students could socially distance as they typed, something that may not have been possible had they been instructing people on larger computer systems, says Bhaskaran.

In 2009, Godrej & Boyce, one of the last Indian companies to manufacture typewriters, decided to stop production. At the time, many predicted that the manual typewriter, which once held pride of place in India’s homes and offices, would finally grow obsolete – a dinosaur consumed by digital technology.

And yet, a decade later, in the winding alleyways of India’s small towns and even in the heart of its larger cities, the manual typewriter still thrives. 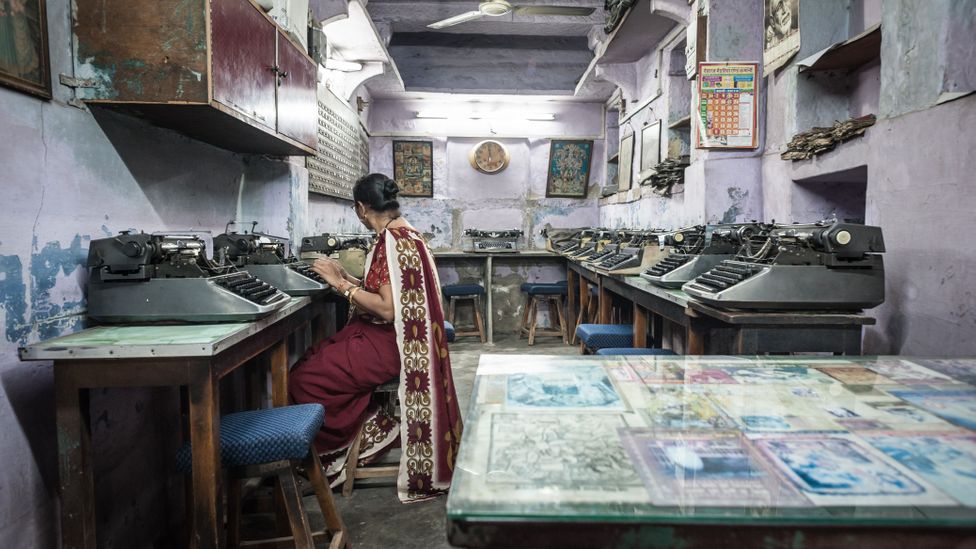 Honing your typing skills on a typewriter is high-stakes, because mistakes can’t be easily corrected – so it’s a great way to learn to type with precision (Credit: Alamy)

Rajesh Palta is the owner of Universal Typewriters Co. He has been refurbishing and selling typewriters from his store in New Delhi’s Kamla market since 1954. «As a family, we’ve been in the business of typewriters for more than a hundred years,» he says. His family business was even featured in a book that chronicled the journey of the typewriter in India: With Great Truth and Regard: A Story of the Typewriter in India.

«While the mainstream use of typewriters in India is already dead, there is a very specific demand that dealers are catering to now,» says Palta. And that demand comes from professionals as well as from nostalgia-driven collectors for whom the typewriter represents a magical piece of the past.

Palta has painstakingly restored century-old typewriters for people from across the country. Like vintage cars, a typewriter’s value skyrockets only when it is fully functional, he says, but restoration often involves great attention to detail, and it can be tricky.  «A refrigerator is huge in comparison but has only one-tenth of the parts of the manual typewriter,» he says.

Sometimes, spare parts for specific models are unavailable because manufacturing has ceased. In these cases, Palta specialises in outsourcing the production of any spares that clients may require to repair their machines. But the parts need to be perfectly made. «If the typewriter’s parts aren’t properly fitted, it won’t work,» he says. Often, a single missing component can cost 10 times its original price to manufacture and replace.

Palta also issues an age certificate for every machine he sells, though this can often involve some degree of sleuthing. «Each typewriter has a unique serial number embossed on the body of the machine, like the engine number of a vehicle. We refer to online portals and check for the date in which the serial number is issued,» he says.

Some of Palta’s regular clients are avid collectors, and have been sending him machines to restore for years. One such client is Maharaja Jayendra Pratap Singh, a member of the former royal family of Balrampur in the Northern Indian state of Uttar Pradesh. He has 11 typewriters in his collection – including a couple of Godrej Prima, a Lettera 32 and a rare model of Hindi typewriter that belonged to his aunt and was in use in the 1950s. 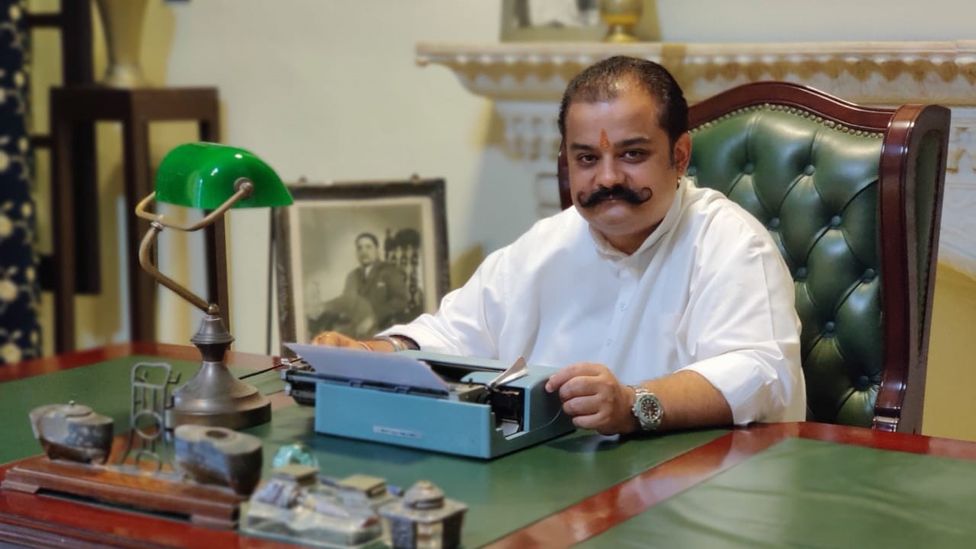 Singh’s love for typing began when he helped his father with his correspondence, but he soon realised that a computer’s easy access to spell-check could make for lazy penmanship. He transitioned to the typewriter because he wanted to improve his creative writing skills and bought his first one, an Olympia, in 2013.

«Initially, it was difficult to learn to type on it,» says Singh. Getting the alignment of the letters right was a challenge and it took him nearly a year of practice to learn to type proficiently. Today, he uses the typewriter for his personal correspondence and to note down the minutes of business meetings. After the festival of Raksha Bhandan this year (falling on August 11, where the sister ties a sacred thread on the brother’s wrist to celebrate their bond as siblings), he typed a personal note to each of his sisters, whom he says were very touched. «I love the impression of the letters on paper – computer printing is never the same. A type-written note makes everything more special,» Singh says.

For creative writers, the typewriter is a means to quell wayward thoughts, and block the distractions that the digital world may bring, as they will their ideas to march to the dance of their fingertips.

But for many professionals in India, learning to type on old machines isn’t as romantic. Typewriters can be relentless and unforgiving – often there is no scope for correction. Making a single mistake would mean that the work needs to be re-done, says Jeyaram Viswanathan, who runs a Human Resources consultancy in the Southern Indian city of Coimbatore. Viswanathan started his professional life in 1979, as a stenographer for a local chemical company. Much of his work involved typing out documents manually.

For senior citizens living in India, the typewriter remains a source of deep nostalgia

«We used a specialised eraser [when we made a mistake] – it was bright turquoise, round with a hole in it – that could help with minor corrections,» says Viswanathan. «But if you rub too hard, you’ll end up with a hole in the paper.»

However, errors are few and far between for trained professional typists, says Bhaskaran. «Our students can’t pass the exam if they make a single error. Learning to type on a typewriter teaches you accuracy.»

And there’s another more pressing reason that Indian bureaucracy still doggedly sticks with typewriters: records are more permanent. Typewriting lasts. «Certain important government documents are still typewritten because the ink never fades, unlike computerized printouts,» says Murugavel Prakash, who trains 300 students in typing at the Sri Krishna typing institute that he runs in Madurantakam, near the Southern Indian city of Chennai.